Comparison Between TECNO Phantom 6 Plus And Samsung Galaxy S6


September last month TECNO mobile launched their TECNO Phantom 6 flagship and so far so good it has got every one talking and lots of people are actually still saving towards this after seeing some really jaw dropping review on the device, but it does not stop there, the reviews just keep coming. for those whom are still looking for bugs on the TECNO phantom 6 plus to crucify, I am sorry to disappoint you cause there are actually none, YES none and I know this cause I have owned and used the device for over three weeks now.

Before now, the dream was to own a samsung galaxy S6 as Ihave always have an eye for that device due to the wonderful specification, I never anticipated TECNO already was preparing a beast, a booming 4G Phablet TECNO Phantom 6 Plus which have moved to replace its predecessor today, Phantom 5. After reading the specifications and having used both phones alongside each other, I decided to write a comparison thread between both devices. 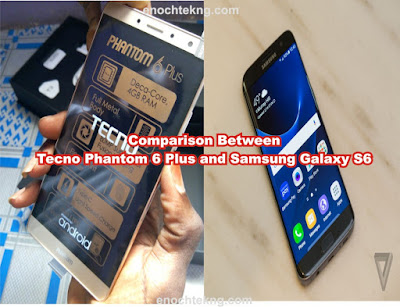 TECNO Phantom 6 plus runs on a Deca-core Cortex, Processor clocking at 2.5GHz also the processor uses Helio X20 Chipset and also uses Mali -T860 GPU. There are so many differences which can be spotted between both devices, ranging from the RAM size, Processor speed along with the number of cores, Quad-core and Deca-core are so far apart in terms of performance and so on.

A higher frequency of the processor along with a lower numbers of cores means that the efficiency won't be out standing, just like in the case of low frequency and higher number of cores will produce effective power.

Samsung Galaxy S6 display is made up of AMOLED, corning gorilla glass and an IPS Capacity technology display on the screen, while on the TECNO phantom 6 Plus, the screen is made up of FHD LTPS capacitive touch screen

STORAGE AND MEMORY
The Samsung Galaxy S6 has no space provided for the use of an external SD card which simply means the phone relies on the in-build storage space that comes with it. but the case is different on the TECNO Phantom 6 plus as the device already comes with a very big storage capacity and still gives you an option to either use two sim cards or use one sim and also an external SD card.

Apart from that the Samsung Galaxy S6 comes with 3 different versions, 32GB, 64GB and 128GB versions which is really alot of space and provides you with your preferred choice that suits you, though the price tag is the only disadvantage i see here. On the TECNO Phantom 6 plus, you get an Internal storage of 64GB and you can also use an SD card as big as 128GB on the device without it lagging or giving issues.

BATTERY CAPACITY
This part is the best of it all, as we all know it is battery that makes up a phone, the Samsung Galaxy S6 spots a 2550mAH Lithium-ion battery which i consider too low for such a smartphone, while the TECNO Phantom 6 spots a 4050mAH lithium-ion battery capacity which can last you for days if used for calls and music  alone without having to charge for a long period of time.

you can pass your judgement by using the comment box below...