How To Use WhatsApp On Blackberry Q5, Q10, Z5, Z10, Classic, Passport Smartphone Devices After December 2016


Good day esteemed readers of enochtekNG, as we all know, Blackberry have stopped the production of mobile phones and also some months back, the CEO of both Facebook and WhatsApp announced that their application will no longer support blackberry and list of other phones too, but today I will be writing a tutorial on how to use WhatsApp on blackberry devices after December 2016.

Due to recent developments on the blackberry smartphone, a lot of Blackberry fans have went as far as selling of their devices for very steep amounts and are porting with great alacrity into android phones, I have received calls and texts concerning this issue which is causing pandemonium amongst Blackberry users, hence the reason behind this tutorial 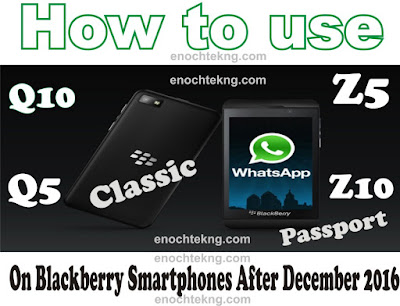 How to Install WhatsApp On Blackberry Smartphones after December 2016

-after downloading and installing Android Assistance.apk to your Blackberry device, Launch it, at the top, click on "tools" tab, and then click on "mobile networks" (which will then turn green), after which you close the app.

-after which you proceed to downloading and Installing WhatsApp for android on your Blackberry smartphone. (put in mind that you must get this WhatsApp from a friend that uses pure android phone like; Gionee, Tecno, Infinix etc. and also make sure you don't download the WhatsApp for Blackberry).

-After collecting the WhatsApp from a pure android user, install and launch the WhatsApp application and start chatting.

If you are having issues sharing media files, just use the step below;
If you have any question / feedback on issues relating to this topic, be sure to use the comment box provided below and I will be with you shortly.